I bet you thought you knew exactly what kind of cheese Camembert is. Round, white on the outside, yellow on the inside, soft, made from cow’s milk, rather mild. And the posher versions come in fancy little wooden boxes… well, yes, of course. Problem is, in contrast to Comté or Roquefort, the name as such isn’t protected. Which means that a lot of cheeses fitting more or less those descriptors, come to market under it. 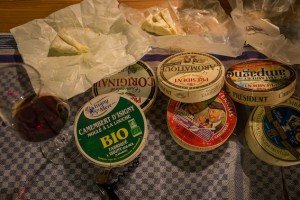 It is only with the addition of de Normandie, from Normandy, that we can be a little bit more certain in our expectations. In fact, there is a small town in Normandy called Camembert, where, you guessed it, cheesemakers until the present day busy themselves to ladle curd into small round moulds: moulé à la louche. With this HeinzelCheeseTalk we explored it all, in many versions, reaching from super-artisanal to mega-commercial. And we found that it’s certainly not true that Camembert is one of the worst or trickiest to pair with wine. We had it all: from off-dry Mosel Riesling (yes!) northern Spanish Muscat/Macabeo (with an intriguing hint of tannin that made it very cheese-friendly – thanks, Wernher), the last bottle of Hubert Lay’s unfiltered Spätburgunder (delicious wine – as for pairing, mixed reactions around the table) and elegant, yet tannin-bold Kayra Bogazkere (at least with this East Anatolian, the traditional French recommendation of „vins rouges souples, fruités et élégants“ certainly worked fantastically well). 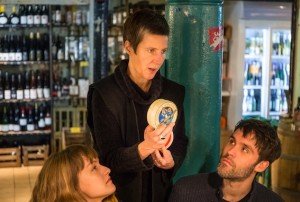 At that point we had already reached the highlight of our tasting, raw milk, fermier, with a rich umami/mushroomy quality underneath the characteristic ammoniac: Janier, bought at Maître Philippe was your and my favorite.  At the very opposite of the scale were three supermarket cheeses, more or less industrial German „Camembert“, of which we all agreed that Badejunge from the island of Rügen was quite pleasant, and the ÖMA Demeter from the Allgäu tasty. The big player Le Président allowed us to compare three different versions, „L’Original“ (nice), „L’Aromatique“ and the „Camembert de Campagne, toujours fait à coeur“. Those last two were strangely soft, with an unusual yellow rind and they made us discuss the different cultures used, leading into an excursion of Camembert making as such. 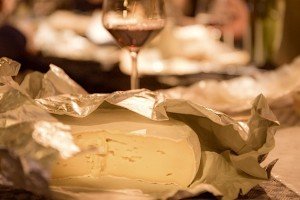 The international cheese network provided us with an additional candidate on our plates and tongues: courtesy of Jason Donnelly from NYC cheese empire Murray’s, who had just arrived in Berlin after a visit to the Allgäu, we had Arturo Chiriboga’s Camembert. Yes, that Ecuadorian in Bavaria with the gorgeous, sweet, creamy, delicious, addictive blue cheese… and his Camembert tastes just as sweet and wonderful. Of course, it has nothing in common with the French original except the bloomy white rind – but who cares? Vive le Camembert.

Many thanks to food and people photographer Manuel Krug who dropped by and let me use his great pictures.

HeinzelCheeseTalks take place regularly, usually on a Friday at 6pm at Markthalle Neun in Berlin-Kreuzberg. I bring some interesting cheese, open a few bottles of wine, and we sit around the large table opposite the Suff winestall, tasting, drinking, talking, discussing (mostly in German – but we usually manage to cater to English speakers too). Invites are sent out about ten days before we meet, to a mailing list you can join here. Reservations need to be confirmed and are strictly by first come first serve – so be quick! And please do let me know if you can’t make it – there is always a waiting list  A donation of ten euro per person (or one or two euros more if you really had a lot of fun..) is much appreciated. Cheesio!