Everybody in food is talking about the north and nordic, and cheese wise as well there is a lot going on. It was high time to embark on two intense days of re-research with my companion in cheese, Theresa Malec. We toured the baltic east of the state of Schleswig-Holstein from Lübeck up to Flensburg, just south of the Danish border, and encountered many beautiful cheeses (and quark!) that would all deserve to be included in this series (you can read more about them here, in German). So much excellent milk (from cows, sheep and goats), and so many people treating it with great care! 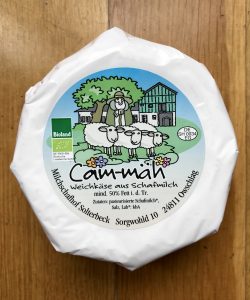 Without any claim to objectivity, just out of my cheese gut feeling, I’ve decided to feature Malte Solterbeck’s Cam-mäh, a small soft sheep’s milk cheese with a bloomy rind. The Solterbecks‘ farm is situated in Owschlag, half way between Rendsburg and Schleswig (fun fact: their direct neighbour is a soccer-golf court ;-). Malte (38) started keeping sheep about ten years ago, whereas his parents‘ main business had been in pigs, whose meat they sold on farmers markets. Obviously the family is good at pragmatically adapting to the change of times, they’ve been living on this estate since 1599. Malte studied agriculture in Hohenheim and has two important comrades in cheese: his sister Antje, who has gradually been taking over the cheesemaking, and Toni, a Romanian herdsman, who has been working with the family since many years. The sheep seem to love and respect him like a father, it is he who walks out on the pasture with them every morning after milking and collects them again in the evening. 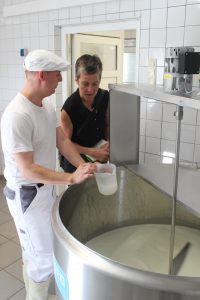 The milk is pasteurised (pragmatism – the wholesale guys don’t tolerate seasonal variation and the like) and worked into excellent yogurt, dense fresh cheese and feta as well as washed-rind harder wheels which ripen in a separate cave over two to three and twelve months into Junger Hirte and Alter Hirte, young and old shepherd cheese.  And into Cam-mäh. Yes, I know, I am not particularly fond of that name either. But that doesn’t matter a bit because the cheese as such is simply a delight. Bought at the farm it is always too young due to demand chronically exceeding production. But even young and elastic and the mild aroma of fresh button mushrooms I like it. With time the wonderful umami minerality of the milk (which never turns pungent and also makes for a lovely long finish in the yogurt) becomes more obvious and takes over from the melodious acidity with which the cheese opens. And it goes on and on… with Cam-mäh I’ve repeatedly caught myself glazing over as I’m listening to that quiet, fascinating cheese voice. Nordic cheese.