April 21 was Raw Milk Appreciation Day, and on May 13 and 14 natural wine producers from around the world will gather at Markthalle Neun in Berlin for another of Isabelle Légéron’s RAW Wine fairs, with the Heinzelcheesetalk that weekend featuring raw milk cheese – and therefore, this month’s cheese just has to be one too – ladies and gentlemen: Tymsboro! 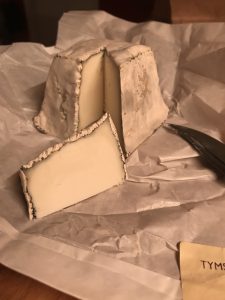 A flat pyramid, made by the amazing Mary Holbrook, from the untreated milk of her own goats, using just a few drops of kids rennet and otherwise working with the naturally occurring, „lactic“ coagulation. Yes, Tymsboro does remind one of the French similarly shaped Valençay, and no, it actually tastes very different, the acidity being more pronounced and vivid. Mary’s 130 goats do not graze in the Loire valley after all, but on the Sleight Farm near Timsbury, a small town in Somerset, UK, which also gave the cheese its name.

And Mary has her own, distinctive ideas. She used to work as a historian in museums, but then her husband inherited the farm in the mid-70s, and there were goats, and they had to be milked… When I went to see her, small fluffy clouds hurried across the blue sky, elderberries hung in heavy purpleblack clusters, and the almost autumnal breeze ruffled Mary’s short white hair as we walked over the courtyard. I am sure she has reached pension age since quite a while, but still drives to London every other week or so to deliver her cheeses in person to Neal’s Yard Dairy’s ripening vaults – „I’d die of boredom if had to retire to the countryside,“ she says. 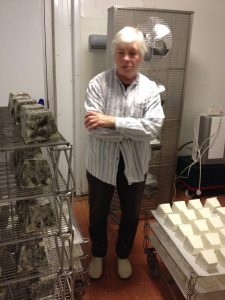 She started as a self-taught cheesemaker, and it’s interesting that in this context she mention the same French textbook about goat cheesemaking that made her Californian colleague Laura Chenel start her lifelong love affair with goats too. However, whereas Chenel was forced by law to pasteurize the milk for her fresh chèvre, Mary on principle uses it without any heating. This allows her to capture the full bandwidth of its natural potential; the landscape, the animals’ and their caretakers’s mood, the weather. Mary also insists on avoiding the usual geotrichum yeast cultures, instead aiming for penicillium to grow over the thin layer of ash with which she coats the fresh cheeses. That makes for a certain robustness in taste: after about four weeks the lemon citrus fruity aromas gradually turn into peppery. And still the cheese literally melts in your mouth, so delicate and yet so chocful of character.