I just returned from a short week in the north of Sicily. Fabrizia Lanza invited me to experience her (visionary) “Cook The Farm” project in situ, and I chose to join her nine (truly fabulous) students for the week dedicated to cheese – obviously. Now I am full of gorgeous pictures, sounds, light, smells, and my fridge is bursting with cheese. The most exciting of them is  – though there is no causal connection between those facts – the one you can’t buy, and also my cheese of this month. Fabrizia’s cousins are the guys behind the impressive Regaleali wine estate next door. As one does in Sicily if one is of noble descent (think Lampedusa and Gattopardo), they grow their own wheat, olives and fruit besides their large portfolio of vineyards, and they have their own flock of sheep. Since around twenty years those sixty rather shy animals have been looked after by Salvatore, an incredibly sweet and friendly man who everybody calls Totò, and who is also in charge of providing the extended Tasca family with cheese. One chilly morning he let us watch him milking his ewes – which he does by hand, a very intimate procedure. But it makes a lot of sense, as the amount of (extremely concentrated) milk is small, and that close contact between shepherd and sheep seems to me an essential bond. Back in the small, blue-tiled dairy Totò filtered the milk through four layers of cloth and added the slightly heated evening milk as well as a small ball of natural lamb rennet, diluted in a little water. After 30 minutes (during which he gallantly treated us to a coffee), a rather solid curd had formed, which he quickly broke and stirred, adding some hot water to tone down the lactic acid. Pressing down the curds in the whey he first ladled out most of the latter (which at that stage is called lacciata and which he would immediately afterwards cook over a vine-fuelled fire to make incredibly delicious ricotta) and then transferred the curd onto a small draining table – all with the help of a small round copper bowl that appears to be traditional in this region’s dairies. He cut the curd into slabs the size of his hands and worked these slabs one after the other into two large round molds (made from plastic, although the woven ones, origin of the characteristic radial pattern, are still around, if not officially), kneading and pressing the curd in them all the time. After about 15 minutes he flipped the embryonic cheeses over, pouring some hot whey over them. They are then kept in the warm whey left over from the ricotta (now called siero) until the evening, dried off for a while and finally salted in brine, before they are rubbed with some more salt and stored on the wooden shelves in the small cave next door. Totò was pretty clear that nothing under six months of aging could be called pecorino.

The one Fabrizia had us tasting, savouring, eating, was a perfect eight months – very intense but without a hint of sharpness or mealiness, an umami burst as intense as a meaty ragù, very complex, long and in spite of its rustic origins, elegant. Which in a way could summarize Sicily as such.

PS The regulars amongst you will long have noticed that my cheese of the month selections are not about recommendations of what to buy for your next sandwich or dinner. On the very contrary, I am opening up windows on to the wide (and sometimes wild) world of cheese you might not even have thought existed. And while a pessimistic person might object to me whetting your appetite without a reasonable chance of ever sinking your teeth into the cheesy stuff in question, an optimistic one hopefully feels enriched by it, and encouraged to start looking for her own discoveries. 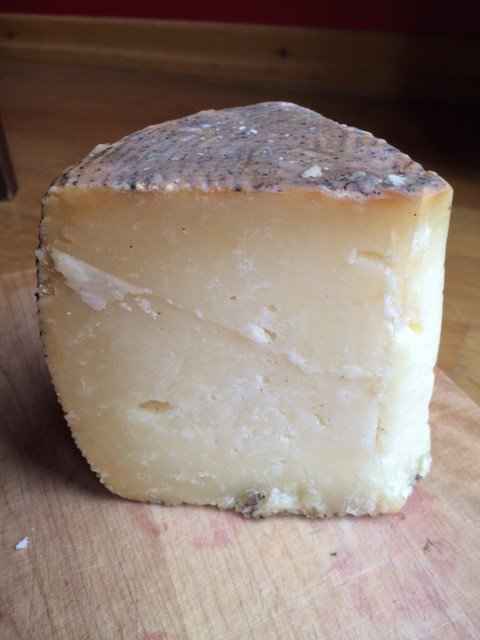