So many cheeses, so many wines, so many of you so interested – therefore we crunched up our rhythm a bit in HeinzelCheeseTalk land. And yes, that’s right: we had Scharlachberg! Germans mostly associate a not very exciting (to say the least) brandy with that name – but actually and mostly it designates a great and steep vineyard on the very northern edge of Rheinhessen, directly on the river Rhine, opposite the Rheingau.

This is where the wonderful Hildegard von Bingen founded her monastery (which is still worth a visit). As was the case with so many vineyards in this corner of the world, the Scharlachberg’s potential lay dormant for quite some while, and who knows if that would have ever changed without Carolin and Erik Riffel. We looked at – no, that’s a euphemism, of course, we tasted and drank six of their wines: Silvaner Quarzit, Weißburgunder Tonmergel, Spätburgunder Mariage, Gutsriesling, Riesling Quarzit (all 2013 or 2014) and a more mature Riesling Turm from 2008. 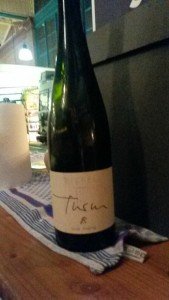 And paired them with mature alpine cheeses, the hard stuff from up the mountains. Because Heinzelcheese has got into the habit of running around the world, (in May I’ll be in Boston, New York and Toronto) preaching the gospel of this kind of cheese with dry, mineraly Riesling. Friends, I needed a reality check – is that really as wonderful a pairing as I think? What’s the reaction with other wines (ours and the cheeses’)?

To cut a long, joyous tasting short: Heinzelcheese may and will go on touring with this combination. Sure, you liked the 6 months old Hubarner from Bregenzerwald with the (unusually crisp) Silvaner, the 12 months old Comté from western end of the French Alps with the voluptuous Weißburgunder and later on the red wine with the 17 months old Alpkäse from Jamei in Kempten. 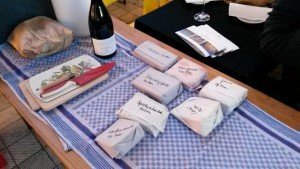 But with the Riesling wines you got really excited: the Gutsriesling right now the most approachable, whereas the Quarzit wasn’t very talkative – at least on its own, the cheese cracked it beautifully. And then: Turm, the Riffel’s top bottling, which was truly top and showed once more how mature wine is much more serene, relaxed and compatible when paired with cheese. We couldn’t decide which of the three more mature cheeses our favorite was, and why would we have to? 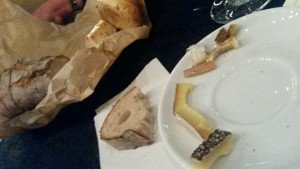 20 months old Spichernhalde from the Allgäu, 19 months old Weißbach from Bregenzerwald and 30 months old Mengesch from Switzerland, matured in the Jamei caves. All three of them culture, pure, fascinating, complex. My thanks to all of you, for your enthusiasm in exploring wine-and-cheese-reality. And to Carly for the pics – cheesio!

PS The cheeses are available at Knippenbergs, Menze (both at Markthalle Neun), Maître Philippe and Kaeskuche. Cheesio!

HeinzelCheeseTalks take place regularly, usually on a Friday at 6pm at Markthalle Neun in Berlin-Kreuzberg. I bring some interesting cheese, open a few bottles of wine, and we sit around the large table opposite the Suff winestall, tasting, drinking, talking, discussing (mostly in German – but we usually manage to cater to English speakers too). Invites are sent out about ten days before we meet, to a mailing list you can join here. Reservations need to be confirmed and are strictly by first come first serve – so be quick! And please do let me know if you can’t make it – there is always a waiting list.  A donation of ten euros per person (or one or two euros more if you really had a lot of fun..) is much appreciated. Cheesio!