Dearest and nearest friends in cheese – we cheddared, we cheddared intensely… and now we know that Cheddar isn’t only the supermarket stuff to put on sandwiches and melt on burgers. Or, at the other end of the wide spectrum, exclusive farmhouse cheese handcrafted in Somerset. 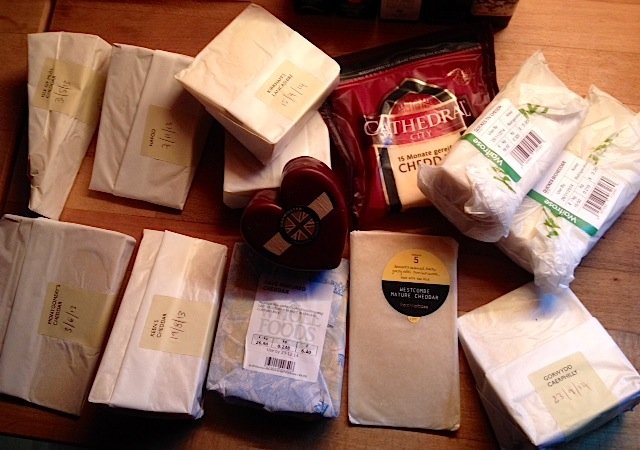 I had brought a large selection back from London, the best source there is, from Neal’s Yard Dairy, (you see, I go to great lengths to get the best stuff for you!). And there was even more: of course we had to taste the Cathedral “kräftig/15 Monate gereift” which you can buy here in Berlin at the supermarket around the corner (greasy and heavy – you weren’t awed). From Waitrose however, the English luxury version of a supermarket, I had brought Mary Quicke’s Cheddar made in Devon, one about eight months old as “medium” (good), the other matured for two years and labelled “Vintage” (very dense in a good way, first quite salty, but in combination with a German Sauvignon Blanc in the glass it opened up beautifully). Westcombe Dairy you also liked, but got way more agitated over the 12 months old Cheddar that had been aged in the Cheddar Gorge: herbal, forest, sweeter than the other cheeses… Before all that we had started in style, with an English bubbly, the Blanc de Noir Brut from Furleigh (very drinkable!) and with that one of my English favorite cheeses, Gorwydd Caerphilly, crumbly, with a good acidity, moreish (more about it here; it’s interesting to note that the Trethowan family just moved the whole operation from Wales to the north of Somerset – and their cheese is still fantastic). 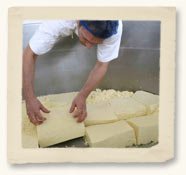 Traditionally most British cheeses have been made on mixed farms, so to say „on the side“, along with all the other stuff that needs doing on a farm. That explains to some extent the „slow“ way Cheddar for instance is produced, the way the curd is cut in blocks, staket and left to ripen (after that it is broken in a kind of mill, the process of “cheddaring“ as such). The other particularity is the pronounced acidity that allows the cheeses to be kept for a long period of time in spite of their high fat content and the way the large cylinders are bandaged with cloth and rubbed with lard. 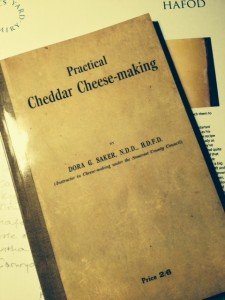 After all that theory (a great source on all this is the facsimile edition of Dora Saker’s Practical Cheddar Cheese-making) we had the two stars of Somerset “farmhouse” Cheddar: Keen’s and Montgomery’s. Both were simply great, and as was to be predicted some preferred this on, others that one. As usual Keen’s seemed more approachable, whereas Montgomery’s was exceedingly elegant, with aromas that reminded us of lemon zest. After that two “others” that demonstrated for good that Cheddar really does not have to come from Somerset: Rachel and Sam Holden’s Hafod (so wonderfully serious and calm, like Seamus Heaney’s poetry) and finally the Reade family’s Isle of Mull, intense and savoury. I knew that each of you would have their very own favorites amongst all those beauties and that you would be surprised how many facets Cheddar has to offer – as usual Heinzelcheese is immensely grateful for your feedback,  your enthusiasm and openness. See you again soon!

HeinzelCheeseTalks take place regularly, usually on a Friday at 6pm at Markthalle Neun in Berlin-Kreuzberg. I bring some interesting cheese, open a few bottles of wine, and we sit around the large table opposite the Suff winestall, tasting, drinking, talking, discussing. Invites are sent out about ten days before we meet, to a mailing list you can join here. Reservations need to be confirmed and are strictly by first come first serve – so be quick! A donation of ten euro per person (or a few cent more if you really had a lot of fun..) is much appreciated. Cheesio!