Once again the continually growing Heinzelcheese network provided the cheese of the month, from cheese shores far away I have never been to (and now want to visit urgently, better sooner than later…). My friend Paula, sommelière and wine-into-words translator extraordinaire, returned from a family trip to Croatia (including a stopover in the south of Styria, Sauvignon Blanc and paragliding!) with a wheel of cheese. 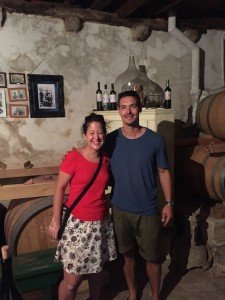 Due to strict instructions it survived a few weeks in her fridge (thank you guys, for keeping your cheese loving hands off!) till we finally convened the other night. She spoke about sheep (a grayish, shaggy mountain breed) in a stony karst landscape, with macchia shrubs instead of lush pastures; the whole setting surrounded by the blue Adriatic sea. Brač is the third largest islands off the Croatian coast, more or less on the same latitude as Rome, and famous for its white limestone the Romans used for their buildings, as well as wine and olives, lamb and fish… 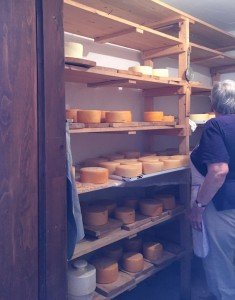 And cheese! The chunk she’d brought along told the same story in its very own voice, thanks to the good folks of Brač who still work their sheeps’ milk into cheese. Paula had purchased it from a neighbor of the Vina Senjković wine estate. The wheels are the size of a large stretched out hand, semi hard to hard and at least six months old. That means they have lost their milky puppy fat ways and developed a beautiful sweetish yellow citrus zest aroma (you can see the polished stone weights used to press the fresh cheese on this picture). Basque sheep’s milk cheeses from the Pyrenees came to my mind, and some Tuscan Pecorino versions. Much better known than Brački Sir is Paški Sir from the slightly smaller island of Pag further north. It is commercially exported and for instance sold at Wholefoods in the US. 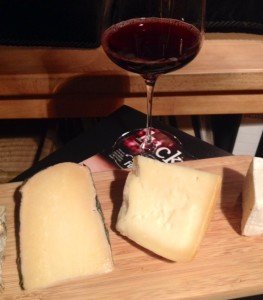 As the Senjković wine, Croatian indigenous Plavac Mali, unfortunately did not make it to Berlin I poured a Zweigelt from Ebenthal in Austria’s Weinviertel region, 2013 Steinberg from Herbert Zillinger, as it also came from a limestone soil, was made from a selection of the smallest berries in a very traditional way and bottled with almost no sulphur. Super lovely dark berry aromas, but no hint of alcoholic sweetness, super ripe and yet at only 12% positively light – on the culinary side, Europe works well. The closer Heinzelcheese network that night had also produced an Umbrian pecorino wrapped in fig leaves that was further proof to that – but it deserves its own story, so watch this space.