I recently had to travel to Switzerland for a day, to interview somebody who lives near Luzern. Thinking I was very clever and would catch two flies with one swat, as we say in German, I planned my trip to fly into Geneva and visit Fribourg cheesemakers, then travel by train to Luzern – only to find out that the cheese date wouldn’t happen. And that the Swiss train fares are even more expensive than the German ones. To cut it short: I felt like a dammed fool for not rebooking my ticket to Zurich, which would have been a short hop… 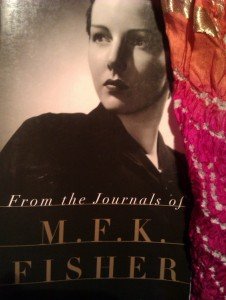 Little did I realize what a treat I was in for: the weather was beautiful, the autumn sun illuminating the vineyards above the shores of Lake Geneva to a gorgeous golden glow. Such a beauty.  And then I saw a road sign: Chexbres. Suddenly I was transported to the world of MFK Fisher, the American writer who showed us that to write about food was to write about life. Chexbres was how she called the love of her life, the man whith whom she lived for a few short years in the late 1930s not far from Vevey, in a house called Le Pâquis.

One of her best stories is about the extraordinary meal he invited her to (and it is of course in fact a story about love and sexuality, to be found in  The Gastronomical Me, at the end of the chapter The Measure of My Powers), which involved caviar, toast and gin. The train sped along, with me dreaming, until we reached Luzern, I contacted my interview (not quite as romantic as MFK’s late night rendezvous) and the next day went once again to Geneva to catch my flight back to Berlin. As a conciliatory gesture towards myself, I bought a piece of Vacherin de Fribourg, the semi-hard cheese that tends to be pleasant rather than truly exciting, thinking it would be just the thing to have as a late snack at home, feeling all warm and glowing from that unexpected, virtual encounter. Back in Berlin I trodded up the stairs to my second-floor flat – and there was the real surprise, one of those things which convince me that there exists a larger plan somewhere, unknown to us, and that talking about coincidences only reveals our ignorance. 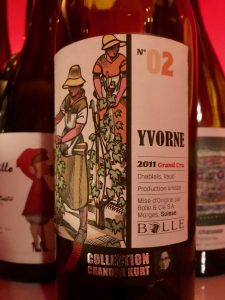 Because in a plastic bag, at the handle outside my entrance door hung a one bottle box of a parcel service. This was very unusual, a neighbour must have signed for it and left it there. I went in, dropped my stuff and, being curious, opened it. My heart beat faster: it was a bottle of white wine from Yvorne, a 20 minutes drive from Chexbres near Aigle, at the eastern end of Lake Geneva… In her diary and letters MFK not only talks about the delights of gardening and other beautiful meals, but also mentions the local wine, always made from Chasselas grapes, like the one standing here in front of me, a sample from a colleague and friend, the Swiss wine writer Chandra Kurt who had selected it for a local wine merchant. 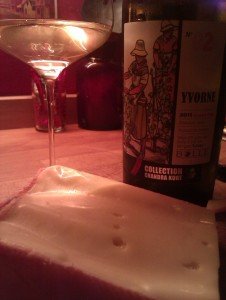 I put the piece of Fribourg on a wooden board, opened the Yvorne and deeply inhaled the nuts, white flours, and honey, then savouring its round, mellow quietness…  So I had my own little feast, in honour of Chexbres and MFK, life and love, cheese and wine. And I realized once again that the best things  can’t be planned, but tend to happen completely unexpectedly. Serendipity.