Most of Piemont’s traditional cheeses originated in the mountains, as the animals gave more milk when summer-grazing on the higher pastures, and people needed to make those riches last for the rest of the year, using whatever methods were possible under the given conditions. Arguably the most spectacular and most original of all Piemontese cheeses is Castelmagno, a natural blue whose name rings a bell with many, while only few have actually tasted it. 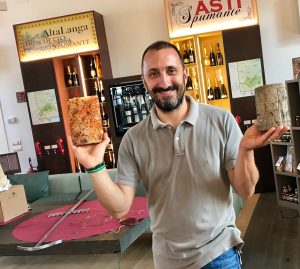 Yes, I’ve written about Castelmagno before, but now, in the blaze of this extraordinary summer on the occasion of the AgriRock festival Collisioni in Barolo, I was lucky enough to meet Enzo Ornato. Together with a small group of like-minded passionate people, he established a creamery, Des Martin. They renovated old premises in the small mountain village of Valliera near Castelmagno in Valle Grana, translating the traditional methods into structures suited to modern times, and also run an agriturismo and a shelter. Valliera is situated above 1500 meters, and the 50 cows (grey Grigio Alpina and red pied Montbéliarde and Valdostana) as well as some sheeps and goats scramble up the steep slopes to almost 2000 meters. 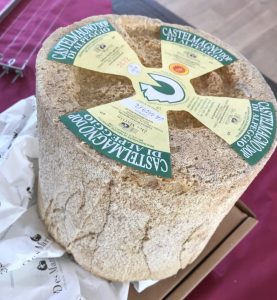 That means that Des Martin can sell their Castelmagno as “d’alpeggio“, alpine cheese, produced as in the past only during the summer months from June to September, with a green label as opposed to the blue one the cheese “prodotto in montagna” carries, which is produced all year round (both are protected by a DOP seal) – the latter can also be excellent, but is rarely of the same distinctive character. 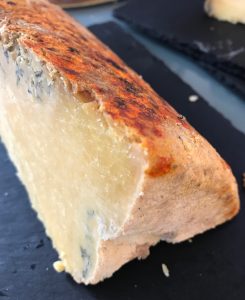 Because that’s what Castelmagno is, in its best form: extremely distinctive. A Des Martin wheel from August 2016 showed a spectacular red glowing rind, reminding me of the last sun rays from behind the snow capped peaks, its paste crumbly but also full and buttery, the aromas earthy and intense like the cool mountain air in the evening; an almost dramatic tension seemed to lurk somewhere, between its wild, untamed side, and centuries of ancient culture.

How is this cheese made, whose history goes back at least a thousand years and who some call “il re”, the king?

Enzo explained how they coagulate the evening and morning milk with natural rennet, break the curd twice, and leave it for 18 hours in the whey before cutting it once more and letting it ferment for three days, until they finally crumble it up again, mix it with salt and press it through a grinder into large cylindrical moulds to form wheels of around seven kilo on top of which a stamp with the Castelmagno sign is placed. Following a light pressing the wheels are left to ripen in natural caves, on shelves made from larch wood, at a humidity of around 90%. Legally the cheese could go to market after 60 days, but Des Martin never sell theirs under half a year. 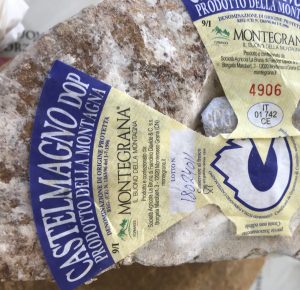 Historically this method has its origins in the fact that the farmers often worked the milk of several days into one large cheese, which would keep longer. Due to the loose structure, during the ripening, natural blue mould grows in the cracks and fissures – very young wheels tend to be all white, taste slightly sour and rather mild, whereas with age they become more colourful and full of umami. The rind is often rough and uneven, varying from greyish over yellow-brownish to red and blue, a combination of mites and mould, the paste crumbly to slaty, sometimes also almost broken down and soft, with more or less pronounced blue and green veining.

We should count ourselves very lucky the king is still with us. The valley was so remote, life and working conditions so hard, and so very few appreciated the royal, wild beauty which did not seem to fit into the modern ideals of the postwar decades. Fortunately, in the early 1970s the great film director Mario Soldati wrote about Castelmagno, and then Luigi Veronelli took it unto him to save this extraordinary cheese from extinction. Nowadays there are voices bemoaning its industrialisation and lack of character, but Castelmagno is still Italy’s smallest DOP and for those with open minds, noses and palates, there is amazing stuff to be discovered. Let’s climb up the Valle Grana! 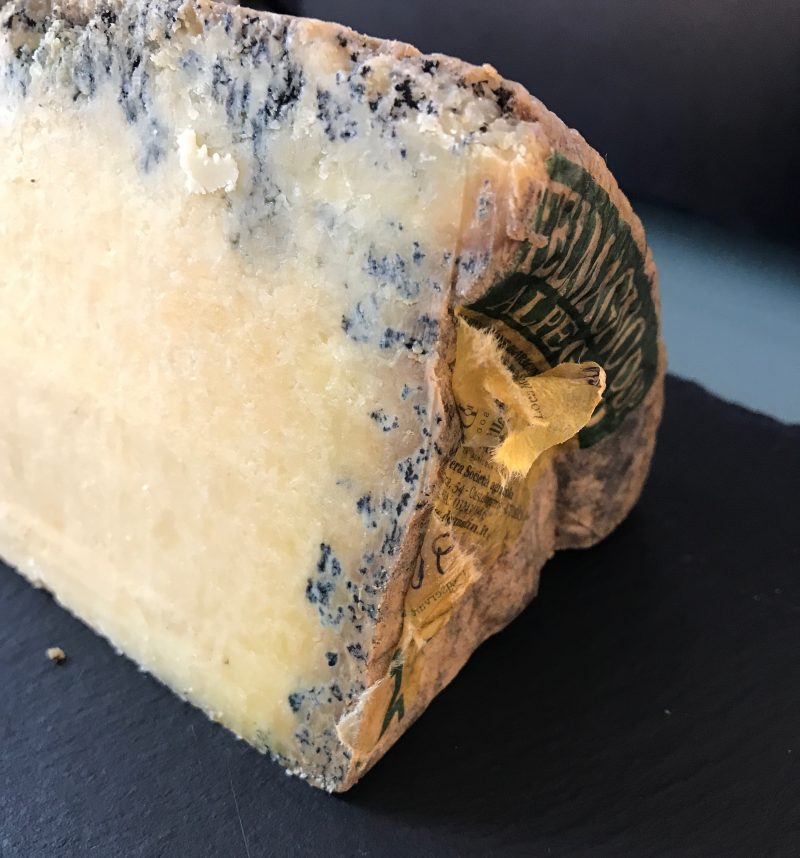