In theory April sounds like spring, even in Berlin, but this year it starts with Easter and snow. White Easter are not that unusual, when still at easter-egg-searching-age I remember quite a few chocolate-filled nests in my grandmother’s cold white garden. Fifty years later I positively rejoice in the low temperatures outside as they provide me with a perfect excuse to rave about Raclette instead of presenting you with spring-light Ricotta or the first chèvre. Which, until now, I’d never thought I would, be it winter or spring. Raclette was either boring and a sad attempt to combine dinner conversation with party game fun (the poky little pans under that round table grill), or it stank, even in my turophile heavy user’s perception, at some street corner, from a food truck, at a market (the half wheels under a special apparatus).

But – last week I spent three days in the Valais, in and around Sierre, having been invited by the association of Swiss top wine producers Mémoire des Vins Suisses who kindly enough let a few writers join them for their annual meetings. It is a fantastic opportunity to check in with all those impressive Swiss wines we see way too little of outside of Switzerland (Completer! Cornalin! Petite Arvine! Heida!…) and renew friendships and acquaintances amongst their makers.

Obviously, one needs to eat between all those tastings and excursions – which leads to equally wonderful moments such as the lunch prepared by Cyril Lacoste at his Café du Marché in Sion, one of the best wine and food parings I’ve encountered for a very long time. And a boat trip on Europe’s largest underground lake in St Léonard (complete with Fendant, Dôle and Apéroplättli, of course – and yes, a journalist’s life isn’t always that hard). Dinner that day, inevitably in the Valais, was to be Raclette, at Château de Villa in Sierre. Where I finally got it…

For preliminaries we started outside, with a glass of Fendant, but as soon as we sat down at the long wooden tables large platters with smoked and dried meat, pork and beef, were put in front of us, as well as constantly replenished bowls with sour-sharp cornichons and small pickled onions. In our glasses red wine was poured, light, refreshing (amongst many others Gamay Les Bans from Gérald Besse). Then the serious part: in a corner of the low, smallish room Milan, a tall, strong man, presided over five no-nonsense Raclette grills and a whole row of halfwheels of cheese. We moved on to white wine (very special: 2010 Fauconnier from Simon Maye!), the meat was replaced by small potatoes, boiled in their skins and served in small padded baskets. We were given a map showing the origin of the five cheeses Milan would serve us successively. It was an alpine trip through the Valais, along the Rhône valley, from  Jeur-Loz (Tanny) in the west via Champoussin, Orsières and Wallis 65 Turtmann onto Simplon in the south east. On our plate in each case was just the melted cheese Milan scraped („racler“) from the respective wheels, together with a piece of the crunchy rind. To my surprise and fascination those four months old semihard cheeses tasted much better and more complex thus treated, than in their solid form, and they were extremely diverse in texture. Some clang rather doggedly onto tongue and palate, others truly melted like soft, fresh cheeses… They seemed as weightless as the mountain air that greeted us the next morning on our trip to the Glacier Wine at more than 1500 meters above sea level in sunny Grimentz. The (very exceptional, and exceptionally delicious) wine from the Cave de Bourgeoisie is a story of its own (which will find the place and space it deserves in due time) – I immediately set out searching for cheese in the picturesque village, amongst the old wooden houses with their thick snow hats. I quickly struck gold at the Marché Villageois. The friendly lady had four months old („fruité“) Raclette from the Fromagerie d’Anniviers as well as a nine months old version, „corsé“. Raw milk, of course. I also bought a loaf of the (deservedly) famous local rye bread and some dried meat.

Back home, yesterday, the next surprise: I – who constantly keep preaching the advantages of mature cheeses – actually prefer… the young cheese! The older one is dominated by a bitterness which does not add to its complexity (as can be the case with other cheeses, such as good cheddar) but rudely pushes everything else aside. The younger cheese however is of an gentle and floral friendliness.It will easily stand in for daffodils and tulips. To everything there is a season – thank you, my Swiss wine friends.

If you enjoyed reading this, you might consider clicking on the button below and supporting me in my work. I’d be more than happy.  Thank you. 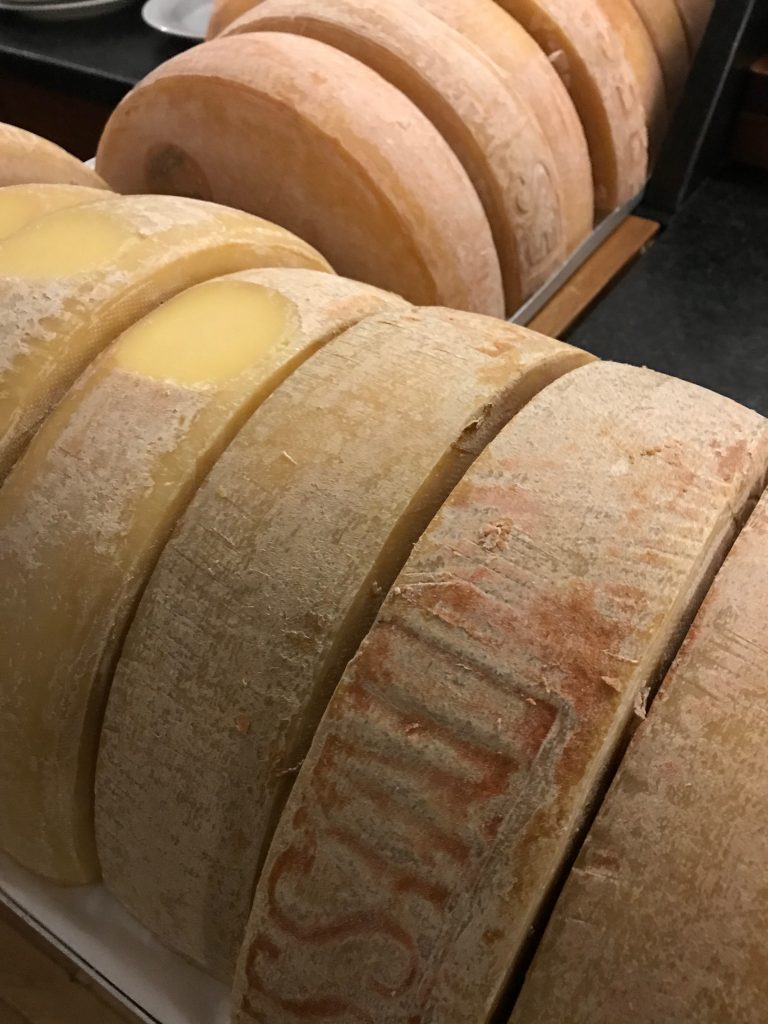 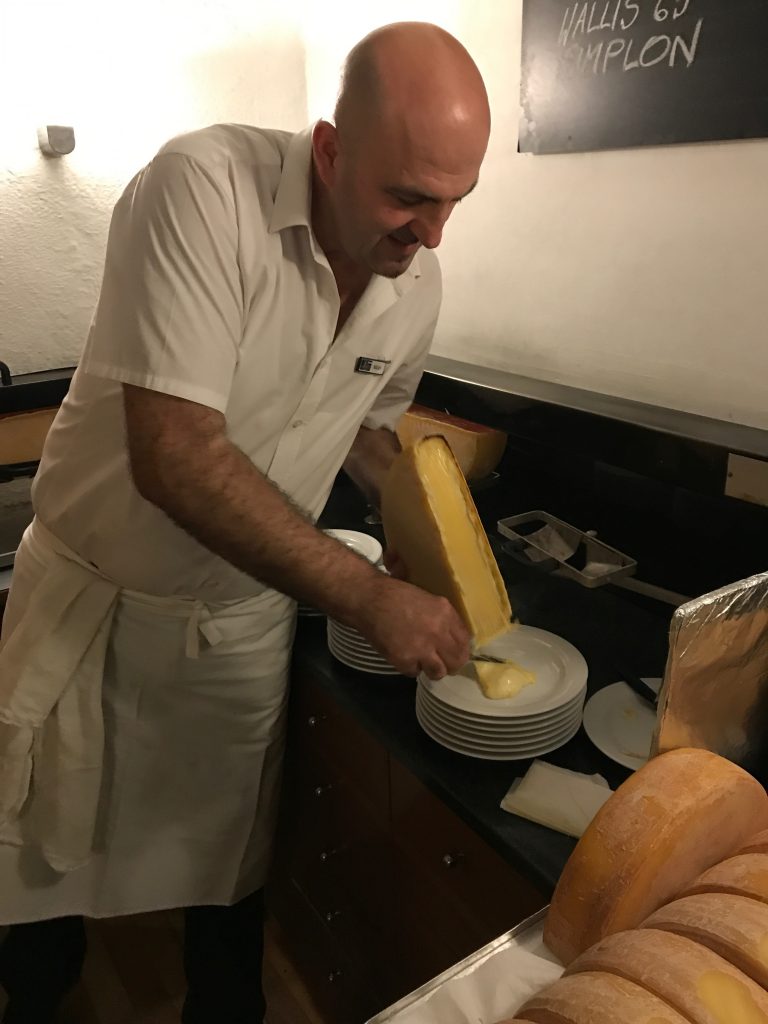 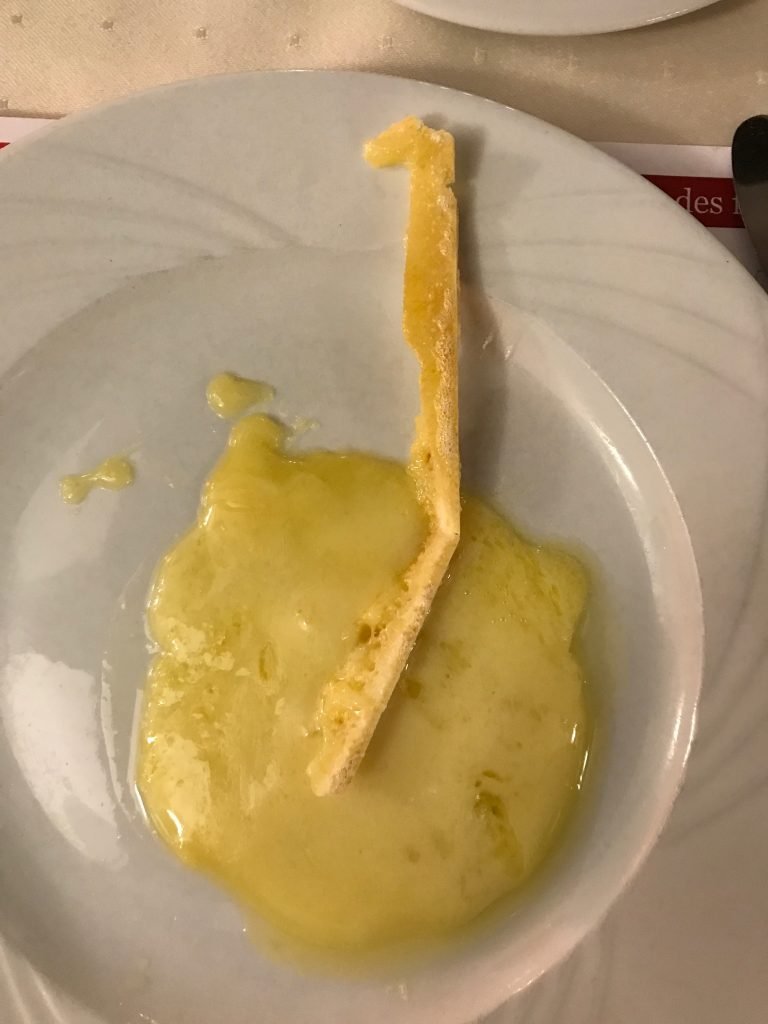 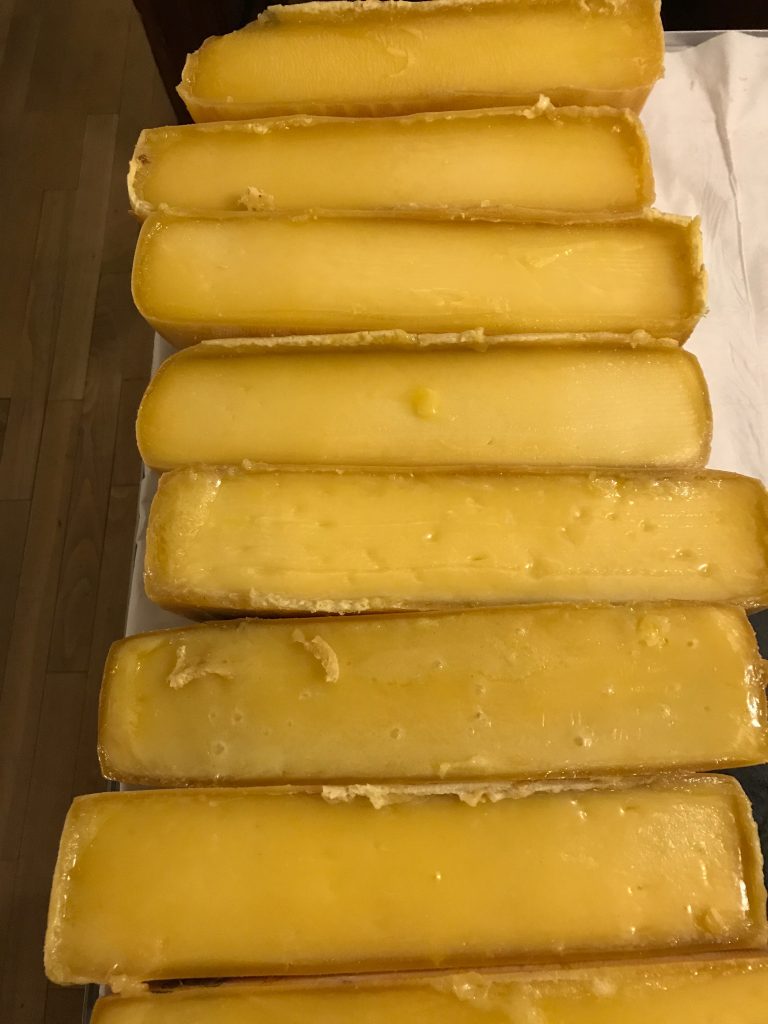