A blue cheese, yet again. Not because I’m feeling blue (the opposite!), but because this cheese is fascinating, delicious, full of character – and makes me want to jump on a train immediately and travel to its origin! Which is: Mazuria, in the northeast of Poland. Sylwia Szlandrowicz and  Ruslan Kozynko live amongst the rolling verdant hills on which their sheep graze. They called their isolated farm Frontiera, border, and their wonderful cheese very simply Frontiera Blue. 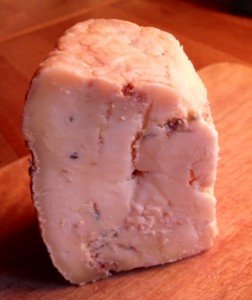 I came across it on my recent (and very first) trip to Poland, in the beautiful city of Poznan, chancing upon an artisanal cheese shop called Koneser. My guide, local wine consultant Michal Wieckowicz (by the way, I do apologize for omitting all special Polish characters, of which there are many, as most of them seem to exceed my computer skills), looked a little skeptical at the „very real“ cheese – but he’s a studied microbiologist, so he knows a little too much for his own comfort! I was very happy to taste all the wonderfully mature Polish farmhouse cheeses, most of them very interesting. And the Frontiera Blue really blew me. I then briefly met Ruslan at the Food Festival Dobrego Smaku, where I also bought more of their cheese. It’s hard to believe that Sylwia only started making cheese not even ten years ago and is entirely self-taught. Inspired by the memory of a French cheese her grandmother once brought home, her self-declared goal has always been to make Poland’s best blue cheese.

Well, I think she achieved this some time ago. 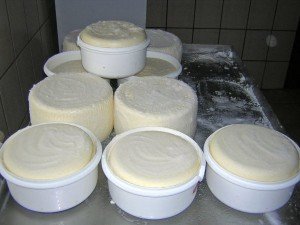 Her sheep’s blue (she also makes one from Jersey milk, which is a little less creamy and tastes more salty and pungent) originally may have been modeled on Roquefort, but it tastes and feels completely different: with more umami than salt, more nordic cool than Mediterranean heat and yet sweet and long and sophisticated and just a little (nicely) funky. The Polish folks I’ve met so far all seem to get misty-eyed on the mention of Mazuria, a region they describe as nature’s own, mystic, beautiful place. I think I join their ranks now, because that’s exactly how Frontiera Blue tastes. For a Full Polish Monty, try to get hold of a bottle of 3.12, a highly enjoyable red wine from Dom Bliskowice (one of the country’s top wine producers, halfway between Warsaw and Krakow) – the two of them make for a surprising, lovely, loving couple.