Anne Saxelby’s story is a journo’s dream and has therefore been told many times. But hey, don’t stories become alive that way, by being told again, and again, and again? So here we go… A beautiful young woman from the Chicago suburbs moves to New York City to study art, and subsequently works at galleries and as a museum intern. However, none of these so glamourous sounding things really appeal. The art world seems too precious to her. So she has a rethink, and decides to swap paintings and sculptures with cheese and wine. 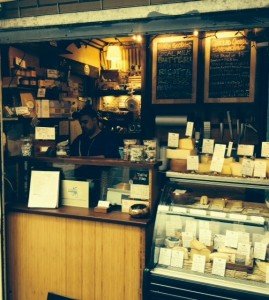 She has a go at both, splitting her working week between cheese legend Murray’s and the equally renowned Chambers Street wine merchant. Pretty soon, her heart knows where it wants to be: „Cheese really captivated me,“ she said when I recently went to see her at the Saxelby’s warehouses in Red Hook/Brooklyn, „it was much more fun, less pretention and snobbery.“ And she goes for it, full-heartedly and hands-on. At Cato Corner Farm in Connecticut, with cheesemakers in the Loire region, and in famous affineur Hervé Mons’ caves. „Art and cheese have a lot in common,“ she told me, „it’s all about being  creative and thoughtful. But other than in art there is no BS factor in cheese, it is much more immediate. You decide with your tastebuds, you like or don’t like. People eat cheese and it makes them happy…“

In December 2005 she comes back to the US and sits down to write a business plan: „It was a big leap, especially in New York City.“ Fortunately she quickly finds a suitable space to test the cheesy waters: in May 2006 she opens her shop at the Essex Street Market. It is really a hole in the wall, half walk-in fridge, half counter. „I had to restrict myself and decided to work with northeast American cheese, starting with around 15 farms.“ Since then Saxelby’s has grown organically, featuring now 40 to 50 producers, depending on the season. But she is still focussing on the northeast, with rare exceptions coming from Wisconsin, posssibly California in the near future and a little French cheese for Daniel Boulud’s Epicerie. Just as back home in Germany, getting the cheese from the farms to New York City was and is a problem, in spite of the relative nearness, as there is no distribution system in place. She has since set up some, but it remains difficult as volumes and productions are relatively small. „It’s all the opposite of Wisconsin, where everybody is at it and the state is very supportive.“ But she wouldn’t be where she is now, with a warehouse in Brooklyn to deal with the 90 percent of her business that are by now in wholesale, amidst her fragrant beauties, if she said this with a sigh. She and her business partner just get on with it, because it’s all about the cheese itself. And with that she invited me to taste some cheese with her, from Peter Dixon in Vermont. It’s called Magic Mountain, and we both liked it very much. So look out for it, next time you’re down in the Lower East Side – eat and be happy. So now, isn’t that a truly beautiful story?

PS: A bit embarrassing to admit, but I honestly can’t remember where the following came from. But it’s so true and therefore I include it anyhow, with my apologies to anybody concerned… „The channels of distribution for local farmers aren’t well developed, in marked contrast to the enormously efficient networks that bring food to supermarkets and chain restaurants. Products that might meet a particular need, at a volume that makes them attractive to chefs, aren’t always getting to the restaurants that want them. These are real concerns and ought not to be minimized. Local requires more work, more thought, and more investment. At the same time, when you’ve embraced an ideology that revolves around notions of purity and piety, no one wants to hear about the obstacles that prevent you from being more holy. Excuses will be construed as weakness. You open yourself to charges of hypocrisy if you’re anything less than completely faithful in your adherence. Or, at the very least, to charges of hype. The fact that distribution is lacking is real.“