Since a few months there is a new stall at the farmers market at Markthalle Neun, the revived old covered market hall in the Kreuzberg district of Berlin. Alessandro Salerno for some reason is totally determined to provide Berliners with the absolutely best possible buffalo mozzarella. Although at least from an Italian point of view, buffalo is redundant in this case, because mozzarella per definition is made from buffalo milk, and anything else is called Fior di Latte and of a completely different texture and taste. 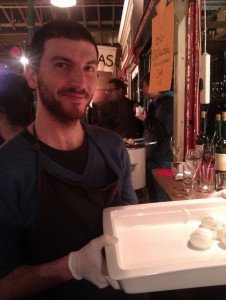 Alessandro comes from Rome and like many other citizens of this great city he has very clear ideas about certain things (especially food), which he declares in a very friendly way. I learned an awful lot from him about mozzarella. The one he sells, from Torricelle, directly from Paestum,the old Greek town south of Napoli (where they never ever add any any salt to the cheese, not like “those from up at Caserta”), really is totally super delicious. It has a thin skin and many onion-like layers underneath. These can only form due to the special composition of buffalo milk and they bind a lot of liquid. Which makes the mozzarella wonderfully juicy, but also means that you have to cut it in slices and dry them overnight in the fridge if you want them on a pizza. If not, you’ll end up with a soggy mess (which in turn is why many a pizzaiolo prefers to use a special “pizza mozzarella” made from a mix of cows and buffalo milk… that in Alessandro’s eyes shouldn’t even be sold as such, never mind the taste). Then we came to talk about ricotta. 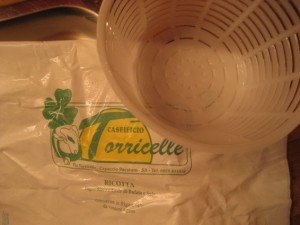 “Well,” said Alessandro, “actually, I don’t eat ricotta.” I knew that he sold the stuff and found this a bit extreme in terms of Roman understatement marketing. But like most mozzarella producers the Torricelle also offer ricotta and he went on and told me that each time he placed an order, Francesca Torricelle had asked him: “And how much ricotta?” Each time he had declined, until he was too embarrassed and ordered some, just to be polite (the Romans’ other side). And since then he eats it. And me too. Although I ate it before, to be honest, but now I know the difference between the usual stuff and top quality.

It is huge! A bit of background: ricotta is made from whey, that’s the liquid that’s left when you make regular cheese. Most dairies just get rid of it, although it’s still shockful of protein. In contrast to casein though it doesn’t coagulate with enzymes such as rennet, but needs temperatures around 100°c. Then big white flakes form which are ladled into small baskets for the liquid to drip off (hence the characteristic pattern). As the lactid acid isn’t active anymore because of the heat, ricotta doesn’t taste sour like quark, but lactic and sweet, just like an active dairy smells (personally I’m always reminded of the skin of a freshly bathed infant…) – gorgeous. However, very often the texture is strangely heavy, as if somebody had added a few spoonfuls of chalk to it. The Torricelle ricotta though manages to combines buffalo milk’s richness (it’s got much more of just about everything than the other types of milk we see in our part of the world) with a cloudlike lightness. I like it as a dessert, for breakfast, just like this… che buonissimo. E grazie Alessandro, for being such a polite guy. 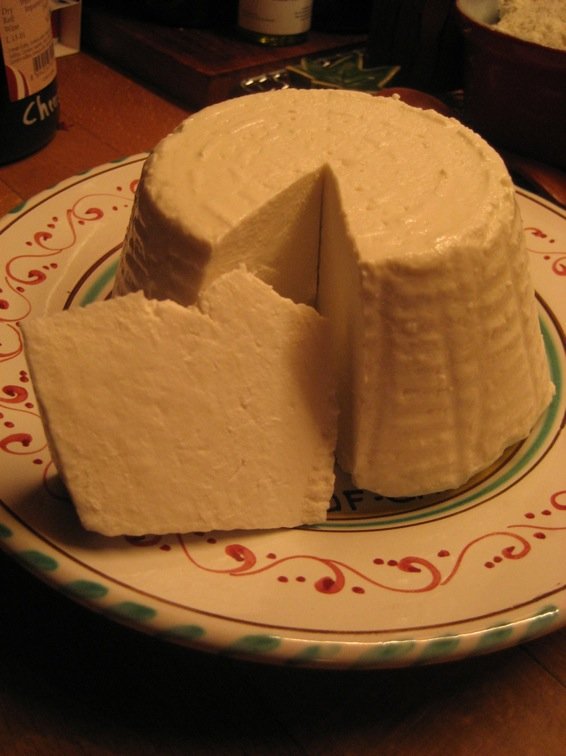