The crazy days of carnival aren’t my cup of tea at all. The time after Ash Wednesday fits in much better with the winterly grey that stubbornly clings to Berlin until way into March. Unfortunately that mood also befits my cheese of the month. Sadly this has to be the obituary of a real character amongst German cheeses, Maria Pott’s Nieheimer. 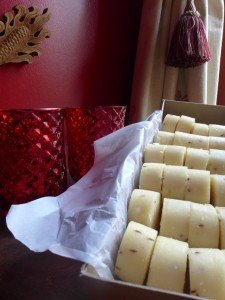 I went to see Maria Pott in May 2008 during the research for my book on artisanal cheese in Germany, Erlebnis Käse und Wein, and as I won’t be able to repeat the experience I’m quoting what I wrote in full length:

Nieheim is a nice old small town and number 32 in Untere Mauerstraße an unremarkable, small two-storeyed terraced house. Maria Pott could be my grandmother, in a pleated skirt and a cardigan, the silvergrey hair in a neat perm. While she is on the telephone to let her daughter know I’ve arrived, I’m sitting on the sofa in her parlour and have time to think. The Nieheimer is a unique feature of Germany’s cheese landscape. Generally speaking the small rounds belong to the same family as Handkäse and Harzer, all of them being low-fat sour milk cheeses, but the Nieheimer has a different story to tell, which can be officially traced back to 1858.

Her father-in-law died in 1940, Maria Pott tells me, who celebrates her 75th birthday tomorrow, and they started with cheese production to make ends meet. Her own husband also died young – cheese seems to have been always women’s business here.  Yet there is neither stable nor vat to admire because they buy in very dry quark made from low-fat sour milk to produce their cheese. „In the past everybody kept cows around here and all the farms made their own quark. But for a long time we came to be the only ones making cheese, and it’s only very recently that somebody else started doing it again. After all, as a small family company we can only produce limited quantities. It all happens here in this house.“

„But it is nevertheless a fulltime job,“ her daughter Angelika Siedenkamp throws in, who has just arrived on her bike. „We’re processing 350 to 400 kilogram of quark a week, with the whole family joining in.“ „Until the mid-1970s the quark came from the dairy coop in Nieheim, then from Steinheim,“ her mother recalls, „today it comes from the Sauerland region, from the Upländer Bauernmolkerei in Northern Hesse.“ I still don’t really understand what exactly happens with the quark, which is produced especially for the Potts in 1500 kilogram lots. Therefore they take me across the narrow hall to the small cheesemaking room at the back of the house, where the floor and the walls are covered with grey ceramic tiles. Angelika Siedenkamp shows me the 50 kilogram plastic bags with quark in the walk-in cooler. „The quark is very densely packed,“ she explains, „if no air gets to it, it keeps quite some time at 6°C. But not every bag is the same, the dry content varies and that’s the interesting thing.“

The only „technical“ equipment here is a largish stainless steal meat grinder with a variety of handmade plates. With it the quark is ground into large white plastic tubs,  resembling streusel crumbs on a cake and smelling very intense: sour and spicy, the complete opposite of the cuddly lactic babyskin aroma of „normal“ cheese dairies! „We leave it to ripen like that at 18 to 20°C for three to four days,“ Angelika Siedenkamp says, „but the wetter it is, the faster it collapses, slowing down the fermentation because there isn’t enough oxygen. Sometimes we have to regrind it.“ Eventually caraway seeds and salt are mixed in by hand, the whole thing goes once more through the „machine“ and back into the tubs and is left to mature for another night.

Slowly I’m beginning to understand the difference between the Nieheimer and other cheeses of that family. Here the maturation as such happens in the tubs, as no curing salt or cultures are added. Once again with the help of the meat grinder, the ripened quark is eventually pressed into a dense sausage which glides onto a short conveyor belt and is cut into rounds using a small harp-like handmade device. The rounds arespread out on wooden boards for a few hours to cool before they are finally packed into grey cardboard boxes, which are stamped with the Potts‘ green logo and lined with white wax paper.

Even back in 2008 Angelika Siedenkamp told me that orders from private customers were getting less because young people simply didn’t know about the Nieheimer. I have no idea if I ought to count myself among the young or the old, as I’ve always been very happy to have it on my cheese board. Its uncompromising straightforwardness, the great balance between acidity and salt, its creaminess in spite of being crumbly and dry… and surprisingly good with Pinot Noir of the more serious kind. I’m glad that I knew him. 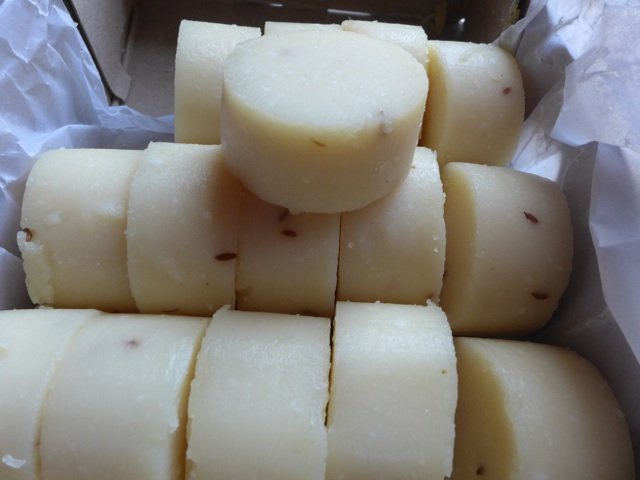