Skyr has long fascinated me. However, Iceland not being exactly around the corner and not in the just-hop-over-to-find-out flight ticket, it took me a long time to figure it out for good. The final reckoning took me by surprise and happened a few weeks ago at the Slow Food Cheese in Bra/Piemont on a Sunday morning. There I met Eirný Sigurðardóttir a well built brunette who was busy mixing white curd with both (gloved) hands in a big bowl. The stall’s sign said „Skyr“. 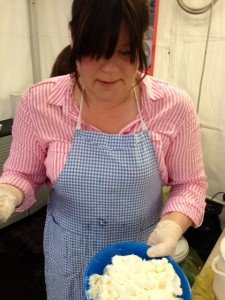 I stopped in my tracks for a taste – it was much more acidic than I expected, really sour in fact, and simultaneously grainy and liquid; not like yoghurt at all. „It isn’t yoghurt,“ Eirny explained with some insistence, as if she’d the comparison way too often. „The milk is not heated but inoculated at body temperature with some skyr of the day before and left to sour and thicken. Then you strain the curd in a cloth till it’s quite dry. And when you want to eat it, you dilute – with milk if you were rich, otherwise, water.“ She let me sample the drained curd and what I tasted made me almost jump with joy: it was quark!

I mean, I knew that in theory, but I had never tasted the real stuff, so different than what is sold commercially under that (unprotected) name. Here is what I wrote in Beyond Bratwurst, my food history of Germany: 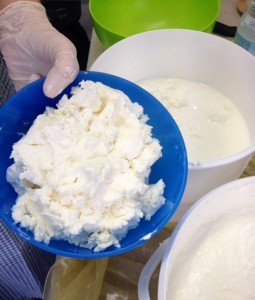 „The question [of what exactly is Blancmanger, a medieval almond dish] becomes even more complex in the context of one of the oldest known collections of European culinary recipes written in a vernacular language. The small collection of about 35 recipes survived in four slightly different versions, of which two are in Danish, one in Icelandic and one in Low German. It clearly goes back to an ‘original’, the Libellus de arte coquinaria, which may have been written down in Middle Low German as early as the twelfth century. It could be the very earliest record of the recipes and culinary themes that were to flourish throughout the late Middle Ages. The recipes are certainly not by a single author but, as was usual at the time, a compilation or adaptation. The lost original has been reconstructed from surviving manuscripts, of which the German version resurfaced as part of the Mittelniederdeutsches Kochbuch, dated to the fifteenth century. 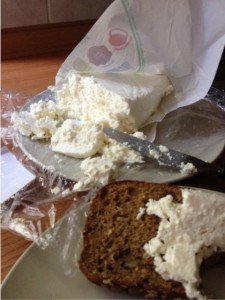 These recipes in many ways are further confirmation of international influences at the top of the social pyramid. Obviously meant for someone with substantial means, they are all northern European adaptations of recipes originating in the south. Although the list of ingredients includes neither rice, olive oil, chickpeas nor delicate vegetables such as chard or spinach, it includes various almond preparations, the majority of which were later to be found all over Europe. The exciting thing about the Libellus is the fact that it con- firms German cuisine’s link to the north, an essential, but often neglected perspective: the Icelandic version of the manuscript includes a recipe for almond milk curdled with wine or vinegar, pronounced to be ‘as good as skyr’. Skyr is popular in Iceland up to the present day and is very similar to German quark, the lac concretum mentioned by Tacitus.“