The sweeter the wine, the older it should be, as the sweetness over the years gradually recedes into the back of the taste spectrum – at least for me. However, that’s easier said than done, as my squirrel gene seems kind of underdeveloped. So it’s extremely nice to come accross a wine such as this Málaga from Dimobe where the ageing has been done at the winery. For 10 years it’s been kept in American oak barrels and during that time (just think back where you were ten years ago, who you were, with whom you were… it’s a long time) it’s mellowed down to wonderful lusciousness.

Just perfect when it’s cold and dark outside and it’s late and you’ve had the white and the red and the cheese and the dessert, but don’t want to part company yet. It’s made from sun-dried Moscatel grapes aka raisins, contains 300 grams sugar per litre (ok, you didn’t really want to know that – just forget I told you), and tastes like I imagine the sun of Andalusia to feel on your skin, mellowed by a lovely breeze from the sea… Best of all: this little sunshot is even less expensive than a cheap flight down to Spain. Unfortunately the poem on the back label is in Spanish, and I can only guess what it’s all about – but I found this blog with a lot of songs and poems from the 13th century Andalusian poet As-Shustarí. Enjoy your winter nights. 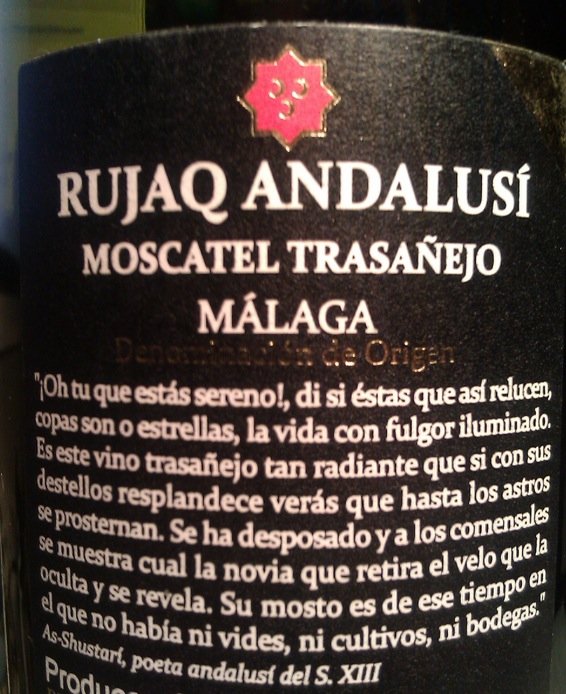