I’m that rare thing, a native Berliner. In a series of earlier lives (alright, I’m not that old, I heard JFK’s famous „Ich bin ein Berliner“ as a baby in my pram, but unfortunately can’t remember it at all – but perhaps that’s why I wrote a book on Food Culture in Germany for American highschool students…) I started cooking even before I learned to read, later on studying and working as a chef and sommelier, including running my own hotel and restaurant on Lake Constance. After this self-imposed exile I returned to Berlin and built up an exclusive French wine and cheese shop. 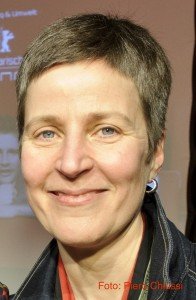 In my current life, which I shared for twenty years with the English wine fanatic Stuart Pigott, I’m a freelance journalist and author, writing about food and drink for various publications including Slow Food, Frankfurter Allgemeine Sonntagszeitung, Allgemeine Hotel- und Gastronomiezeitung, Effilee as well as the American magazines Gastronomica and Saveur. I consider it a great luxury that these days I only cook at my own stove for chosen guests, that is our friends. Likewise, my books Erlebnis Essen – vom Duft der Erdbeere und der Würze des Teltower Rübchens (2006) and Erlebnis Kochen – Manifest für eine Küche ohne Rezepte (2007, both published by Scherz Verlag) are not about rarefied ingredients and exceptional moments, but the highest possible quality and enjoyment in everyday situations.

I confess: I’m addicted. 24 hours without wine, cheese or a kitchen, and the withdrawal symptoms are difficult to ignore… perhaps my work as a chef, that year at sommelier school and five years selling the best of French cheese at Maître Philippe in Berlin should be classified as therapy. Or the opposite? Anyway, it took Neal’s Yard Dairy, that paradise of British artisanal cheese in London, and a trip to some great Californian cheesemakers to open my eyes for what was going on back home. Once my eyes for cheese were opened though, I started to see how much was happening around here. Another book was begging to be written! In 2008 I travelled almost 13,000 kilometers across the new German cheese lands, visiting more than a hundred dairies. I met wonderful people, was allowed into their world, tasting tasting tasting… it goes without saying that wine had to be part of those excursions. Erlebnis Käse und Wein was published in 2009.