I could start this with saying that Ebbelwoi, traditional apple cider from around Frankfurt, doesn’t exactly enjoy a great reputation. But that would be so yesterday and predictable. I could also be totally honest and admit that for some unknown reason, a 12 bottle box just re-emerged from the depth of my cellar, containing 2011 and 2009 (!!!) apple wines from Andreas Schneider in Niedererlenbach near Frankfurt, Germany’s leading cider producer. Kind of embarrassing and unprofessional, I know. However, as life goes, it made for some amazing stuff in the glass. 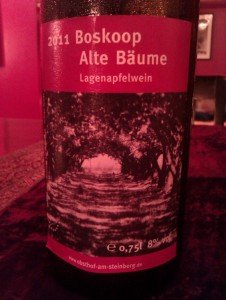 I never expected the 2009 Boskoop Alte Bäume (Old Trees, a single orchard bottling) to taste still so fresh. Ok, it would have been even more enjoyable on a hot summer day, being quite acidity driven. That was also due to the fact that it contained some Speierling, tannic sorbus fruit traditionally added to help clarifying and stabilizing cider (but making for, well, somewhat less then cuddly results). The 2011 bottling from the same orchard not only had at least less Speierling added if any at all, and it had been closed with a screw cap: it smelled delicious and deep, of red and green fruit, tasted lively and rather elegant – and it kept really well over four days in the fridge, always a good sign (even if the restraint not to finish the bottle on the first night was a little hard on the taster). 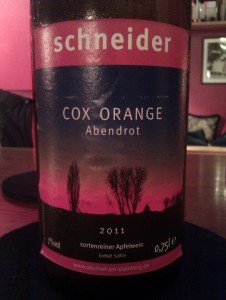 But there was even better to come. The 2011 Cox Orange Abendrot (the red sky at sunset) also tasted completely dry, had the most beautiful nose of freshly prepared apple sauce and all the juiciness of the best Cox apples, finishing with a hint of fresh walnuts… Folks, I was in apple heaven. And I stayed there for a little while (I swear, it was not about the alcohol, these wines had respectively 7 and 8 %). Because next in my glass was the 2011 Muskatrenette Späte Ernte (Late Harvest), Barrel 11. 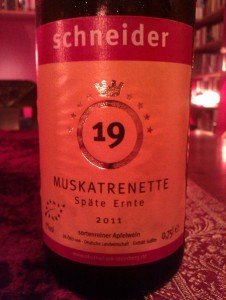 It glowed and shimmered with a lovely touch of pink, and it had the enticing aroma of red berries. This one was off-dry and very delicate, both in a good way, like lace… Its balance reminded me very much of a Mosel Riesling Kabinett, dancing on my tongue and into my heart.
Sometimes a little chaos and forgetfulness can be a good thing. Thank you, Andreas, for being so persisting in your search for the new German cider. This isn’t any old Ebbelwoi, but truly great apple wine.